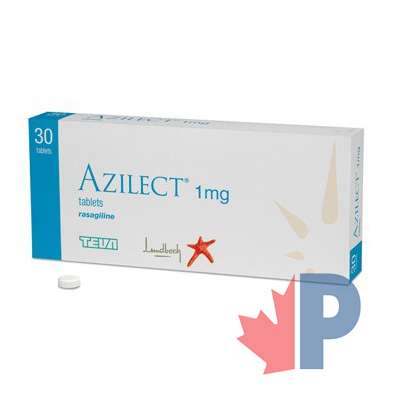 What is Azilect (Rasagiline Mesylate)?

Azilect is a medication prescribed to treat symptoms of Parkinson’s Disease, particularly resting tremor and hypokinesia. The active ingredient rasagiline belongs to a class of drugs called monoamine-oxidase (MAO) inhibitors, and works by increasing dopamine, norepinephrine, and serotonin levels in the brain. Azilect is sometimes used alongside other Parkinson’s medications such as levodopa. Taking rasagiline can mitigate the end-of-dose fluctuation often seen when levodopa starts to wear off.

Azilect is to be taken orally, with or without food, once daily. Tablets come in two strengths: 0.5mg and 1mg. The prescribed dosage is dependent on the severity of your condition, your current medication schedule, and how you respond to treatment. It is important that you take this medication exactly as prescribed by your doctor. Do not increase your own dose or take more often than prescribed, as this can increase your risk of developing side effects. As this medication is intended to ease the difficult movements often seen with Parkinson’s Disease, take care not to overexert yourself when you experience improvement in your symptoms. Gradually increase your activity so as to allow your body to adjust to changes in balance and coordination.

This medication should be stored in its original packaging until it is time to take it. Store Azilect tablets in a place that will not exceed 25°C and keep out of direct sunlight and away from moisture. Keep out of reach of children and pets. Do not consume expired product. Dispose of expired or surplus medication responsibly, following the directions of your doctor or pharmacist. Do not flush medication down the toilet or sink. Do not share this medication with anyone else, even if they have the same condition as you.

All medication comes with the risk of developing side effects. It is important to recognise that your doctor has determined that the risk of side effects is outweighed by the potential benefits this medication can provide. Side effects differ between individuals, and it is possible you will not experience any. Common side effects associated with Azilect include:

If you experience any of these symptoms and they concern you, or they worsen or do not resolve on their own, contact your doctor.

Occasionally, Azilect can lead to severe side effects that should be taken seriously. These include:

Occasionally, rasagiline use has been shown to cause sudden sleep attacks randomly during daily activities. This is often not preceded by any drowsiness and can occur at any time. For this reason, it is important that you do not operate heavy machinery (including driving) until you know how this medication affects you. This risk is exacerbated by alcohol consumption or other medications that have drowsiness as a side effect. Talk to your doctor if you are concerned.

As this medication functions by increasing serotonin (as well as dopamine and norepinephrine) levels in the brain, it can on rare occasions lead to serotonin toxicity. The risk of this occurring increases if you take other medications that also increase serotonin alongside Azilect. If you notice symptoms such as tachycardia, hallucinations, coordination loss, severe dizziness, nausea/vomiting, diarrhea, unusual fever, or unusual agitation, seek emergency medical help immediately.

Allergic reactions to Azilect are rare but not impossible. Do not take this medication if you are allergic to the active ingredient rasagiline, or any of its constituents. Seek emergency medical attention immediately if you experience symptoms of an allergic reaction, including rash, itching, facial swelling, severe dizziness, or difficulty breathing.

This is not an exhaustive list of side effects. If you notice any abnormalities or changes within yourself, contact your doctor immediately.

Ensure your doctor is aware of your complete medical history, including all allergies. Do not take Azilect if you are allergic to the active ingredient rasagiline or any of its constituents. Tell your doctor if you have a history of allergic reactions, particularly to other medications. Your doctor should be aware of your personal and family medical history, particularly of heart disease (including heart attacks, heart failure, and coronary artery disease), stroke, hypertension, liver disease, mood disorders (schizophrenia, bipolar disorder, depression), diabetes, thyroid disorders, pheochromocytoma, and sleep disorders.

Azilect can cause dizziness or drowsiness, which is exacerbated by alcohol or marijuana use. As stated, do not operate heavy machinery (including driving) until you are aware how this medication affects you. Limit alcohol intake, and discuss with your doctor if you regularly use cannabis.

Prior to having surgery, all medical personnel involved in your care should be aware of your complete medication schedule.

This medication should only be taken during pregnancy when absolutely necessary. If you think you could be pregnant, intend to become pregnant, or do become pregnant while taking Azilect, discuss what to do next with your doctor.

It is not known whether this medication can pass into breast milk. If you need to breast feed while taking Azilect, consult your doctor first.

When two or more medications are taken concurrently, they can interact with one another, potentially changing how one or more function in the body and increasing the risk of side effects. It is important that you keep a comprehensive list of all the medications you take on a regular basis (including prescription and non-prescription) and share this with your doctor. Do not start, stop, or change the dosage of any medication without first consulting your doctor.

As mentioned, the risk of developing serotonin toxicity increases if Azilect is taken alongside other drugs that also increase serotonin levels. These include MDMA (“ecstasy”), St. John’s wort, tramadol, opioids (fentanyl, meperidine, methadone), antidepressants (maprotiline, mirtazapine, SSRI’s, SNRI’s), among others.

Interactions can still occur even if the product is taken weeks before or after Azilect. Your medication schedule may need to be adjusted to accommodate Azilect, so ask your doctor for clarification, and follow their instructions carefully. Tell them if you have taken any of the listed medications two weeks prior to starting rasagiline, and if you have taken fluoxetine within five weeks of starting.

What type of drug is Azilect?

Azilect contains the active ingredient rasagiline, which belongs to a group of drugs called MAO inhibitors. It improves the symptoms of Parkinson’s Disease by increasing the levels of serotonin, dopamine, and norepinephrine in the brain.

How long should you take Azilect?

Continue taking Azilect for as long as your doctor tells you. Do not stop taking this medication without first consulting your doctor, as stopping it suddenly can lead to side effects.

What happens if you miss a dose of Azilect?

If you forget to take a dose of Azilect, take it as soon as you remember. If you remember close to the time of your next scheduled dose, skip the missed one altogether. Take the following dose according to your medication schedule. Do not take two doses at the same time to catch up.

What should you do in an overdose?

What is the best time to take Azilect?

Azilect tablets can be taken at any time of day, but you should try to take them at the same time each day. Taking them in the morning with food can help you set up a routine.

How long does it take Azilect to work?

You can expect to see improvement in Parkinson’s symptoms within 1-3 weeks of starting Azilect. This can vary between individuals and is dependent on taking the medication consistently.

What happens if you stop taking Azilect?

You should not stop taking Azilect without first consulting your doctor. Suddenly stopping this medication can lead to unwanted side effects such as fever or clumsiness. Your doctor will likely want to gradually decrease your dose.

Can you take Azilect while taking antidepressants?

It is not recommended to take Azilect if you are already taking antidepressants, as this can increase your risk of developing serotonin toxicity. Consult your doctor if you are wanting to start Azilect. You will have to wait five weeks after stopping your antidepressant medication before you can start Azilect.

What foods should you avoid while taking Azilect?