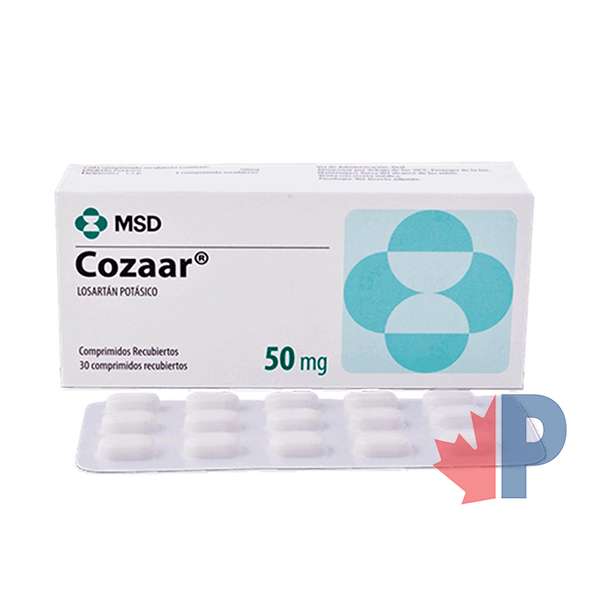 What is Cozaar (Losartan Potassium)?

To help protect the kidneys against diabetes, Cozaar is also prescribed for adults with type-2 diabetes as well as high blood pressure and protein in their urine (proteinuria). A doctor may also prescribe this medication for other conditions. It can help lower the risk of diabetic nerve pain (neuropathy). For certain people with heart disease, it can help to reduce the risk of stroke.

How does Cozaar work?

Cozaar comes in the form of 25, 50 and 100mg pills, your doctor will advise you on the correct dosage. They are all film-coated and white in appearance and oval-shaped, except for the 100mg pill which is teardrop-shaped.

The non-medicinal ingredients include:

How should you take Cozaar?

Cozaar is usually taken once a day and can be taken with or without food.

To take this medication in its liquid form, shake the bottle vigorously before measuring out each dose. Do not use a typical household spoon, use a special measuring spoon for an accurate dose.

How to store Cozaar

The most common side effects of Cozaar include:

Tell your doctor if you experience any side effects that cause discomfort or do not subside.

Cozaar should not be given to anyone else if it has not been directly prescribed to them by their doctor as it can be harmful.

Anyone who learns they are pregnant should cease taking Cozaar as soon as possible. A developing fetus can be harmed by medication that impacts the renin-angiotensin system during the second and third trimesters. Specifically, it can reduce fetal renal function and increase fetal and neonatal death. Oligohydramnios has been linked to fetal lung hypoplasia, as well as skeletal deformity.

It is unknown whether Cozaar is excreted in human milk, but the potential for negative effects on nursing infants means the mother’s doctor should be consulted to decide whether to discontinue nursing or discontinue the drug based on how important taking the drug is to the mother.

A dry, persistent cough has been found to be associated with ACE-inhibitor use and may necessitate ending the use of ACE-inhibitor treatment.

Hypotension in volume- or salt-depleted patients

Symptomatic hypotension may occur in volume- or salt-depleted patients with an activated renin-angiotensin system.

The use of other medication at the same time as Cozaar can result in increased serum potassium levels, leading to hyperkalemia. Serum potassium levels should be monitored regularly and treated. A reduction in Cozaar dosage or total discontinuation of its use may be necessary. Patients using Cozaar should not take potassium supplements or salt substitutes with potassium, at least not without asking their doctor.

Use in Specific Populations

If oliguria or hypotension is detected, pay attention to blood pressure and renal perfusion. To reverse hypotension, or restore renal function, medical carers should consider exchange transfusion or dialysis.

In patients aged between 6 and 16, Cozaar has been known to result in antihypertensive effects. So far, Cozaar has not been established as safe and effective in patients under 6 years of age or in pediatric patients with glomerular filtration rate <30 mL/min/1.73 m2

There have been no general differences detected in effectiveness or safety between patients aged 75 or over and younger patients. However, it is a possibility that some older patients may be more sensitive to Cozaar.

In a study, compared to black patients treated with Cozaar, black patients with hypertension as well as left ventricular hypertrophy receiving atenolol were not as likely to experience the primary composite endpoint. The first experience of stroke, myocardial infarction or cardiovascular death was the primary endpoint, studied with an intention-to-treat (ITT) angle.

Relatively increased plasma concentrations of losartan and active metabolite are a symptom of renal inefficiency. An adjustment to the dose of Cozaar is unnecessary for patients with renal issues unless the patient in question is also volume-depleted.

Interactions Between Cozaar & Other Medications

This will raise the concentration of serum lithium and lithium toxicity has been detected during simultaneous use of lithium and angiotensin II receptor antagonists. Lithium levels should be monitored during use with other agents.

Among elderly, volume-depleted patients, including those on diuretic medication, or with renal impairments, simultaneous use of Cozaar with NSAIDs, including selective COX-2 inhibitors, may result in worsening renal function, extending to possible acute renal failure. This is normally reversible, but renal function should be monitored periodically in patients receiving Cozaar and NSAID therapy.

There isn’t a lot of information available on overdosing on Cozaar. However, hypotension and tachycardia are the most likely outcomes.

Parasympathetic (vagal) stimulation could cause bradycardia. Treatment should be initiated if symptomatic hypotension is detected. It should be noted that hemodialysis will not be able to remove Cozaar or its active metabolite.

Cozaar is contraindicated for the following patients:

What other medications can interact with Cozaar?

What are the more serious side effects?

Some of the more serious side effects Cozaar can cause include:

If you experience any of these side effects, you should seek medical help as soon as possible.

What about less common negative reactions?

What should I make sure my doctor knows about my medical history before they prescribe Cozaar?

Make sure your doctor is aware of it if you are pregnant, or if you have ever:

You should also let them know if you are on a low-salt diet or if you are dehydrated.

Should I take Cozaar whilst pregnant or breastfeeding?

If you believe you are pregnant, do not take Cozaar. Instead, let your doctor know right away if you are pregnant. Cozaar can injury the unborn baby and possibly result in the fetus’ death if you take it during your second or third trimester.

Also, you should not breast-feed your baby while using this medicine.

What food and drink should I avoid while using Cozaar?

Alcoholic drinks can lower your blood pressure and increase the side effects of Cozaar. You can take it with or without food, but stop using potassium supplements or salt substitutes, unless you have been advised to continue by your doctor.

Should I stop exercising while taking Cozaar?

You should avoid rising too swiftly from a sitting or lying position. Getting up too quickly may leave you feeling dizzy.

What should I do in case of overdose?

If you think you, or someone else, has taken an overdose of Cozaar, you should seek medical care immediately. If someone has taken Cozaar and has collapsed and isn’t breathing, you should contact the emergency medical services.

What happens if I miss a dose?

Take your normal dose as soon as possible. If it is almost time for you to take your next dose, you should skip the one you missed. You should not take two doses at the same time.

What happens if I miss a dose?

Does Cozaar block the Coronavirus receptor?

How long will it be before I see results?

One normally needs to take Cozaar for around 3 to 6 weeks before seeing full results. Cozaar can be taken on its own, or with a water pill (diuretic). To see the best results, you should take it regularly, even if you are feeling fine. Remember, most people with hypertension do not feel unwell.

What's the difference between Cozaar and Diovan?

What are the similarities between Cozaar and Diovan?

Does Cozaar cause irregular heartbeat?

Arrhythmia (irregular heartbeat) has been detected with Cozaar, but it is rare. Dizziness is normally felt early in treatment or when the dosage is increased, but it usually dissipates as treatment continues.

Are Losartan (Cozaar) and Losartan Potassium the same drug or two different ones?