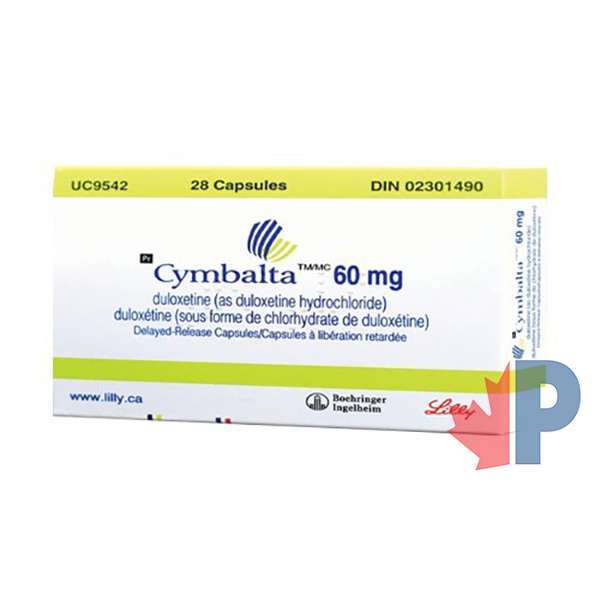 Cymbalta is an oral medication containing the active ingredient duloxetine, prescribed primarily to treat depression and anxiety. It can also relieve nerve pain in diabetics or chronic back pain, arthritic pain, or fibromyalgia. Duloxetine belongs to a group of drugs known as serotonin-norepinephrine reuptake inhibitors (SNRI’s), which function to restore the balance of serotonin and norepinephrine in the brain.

Cymbalta is to be taken by mouth once or twice a day as directed by your doctor. It can be taken with or without food, although taking it with food can help with nausea. Do not crush, chew, or dissolve the capsule as this can release all the drug at once, leading to negative side effects. It must be swallowed whole.

Dosage is calculated based on age, the severity of medical condition, and response to treatment.

This medication should be stored in its packaging until it is time to take them. Store in a place that will not exceed 25°C, out of direct sunlight and away from moisture. Keep out of reach of children and pets. Do not consume expired medication. Dispose of expired or surplus medication responsibly, following the directions of your healthcare provider. Do not flush medication down the toilet or sink.

If you are worried about any of the above side effects, contact your healthcare provider, particularly if they worsen or do not resolve on their own.

Tell your doctor if you experience any of the following:

Occasionally, Cymbalta can be associated with severe side effects that should be taken seriously. Seek medical attention right away if you experience any of the following:

Allergic reactions to Cymbalta are rare but not impossible. If you experience a rash, itching, facial swelling, severe dizziness, difficulty breathing, blisters on the skin, or mouth sores, get medical help right away.

This is not an exhaustive list of potential side effects. If you notice any unusual changes while taking this medication, consult your healthcare provider.

Inform your doctor if you are allergic to any of the ingredients in Cymbalta, including the active ingredient duloxetine. Ensure your doctor is aware of any other allergies you have.

Make sure your doctor is aware of your medical history, both family and personal, particularly of psychiatric disorders, suicide attempts, bleeding disorders, glaucoma, hypertension, liver or kidney disease, seizures, stomach problems, or substance abuse. They may like to adjust your medication schedule based on your history.

This medication can cause dizziness. It is recommended to avoid other products that can exacerbate this dizziness, such as alcohol and marijuana. Do not operate heavy machinery (including driving) until you are sure how this drug affects you.

Cymbalta can affect your blood sugar if you are diabetic. Monitor your blood sugar carefully while taking Cymbalta and share any changes or abnormalities with your doctor. They may need to adjust your medication or exercise schedule to accommodate.

Always tell your doctor what medication you regularly take (including prescription and non-prescription) before having surgery.

Older adults can be more susceptible to side effects such as bleeding, light-headedness, and coordination loss. They are also more likely to develop hyponatremia (salt imbalance), especially if they are taking diuretics.

Children can experience a greater susceptibility to appetite and weight loss. Monitor the weight and height of children taking Cymbalta. It is not recommended in children under seven years of age.

Cymbalta is not normally recommended for people who are pregnant unless it is absolutely necessary. Cymbalta can increase the risk of bleeding at birth when taken in the final 30 days of gestation and may pose a risk to the unborn baby.

This medication can pass into breast milk and have negative effects on a nursing baby. It is therefore not recommended for people who are breastfeeding.

Medications taken concurrently can interact with one another, changing how they act in the body or increasing the risk of side effects. Inform your doctor of all the medications you take regularly, including prescription and non-prescription drugs. They may adjust your medication schedule to accommodate Cymbalta. Do not start, stop, or change the dosage of any medication without talking to your doctor first.

Products that can interact with Cymbalta include drugs that cause bleeding, such as antiplatelets, NSAIDS, and blood thinners. Others can affect how duloxetine is removed from the body, which in turn affects its function. These include cimetidine, viloxazine, quinolone antibiotics, among others. Further, Cymbalta can affect how other medications are removed from the body, such as antiarrhythmic drugs, antipsychotics, and tricyclic antidepressants.

MAO inhibitors can have a severe reaction when taken with Cymbalta, possibly even fatal. All MAO inhibitors should be avoided while taking Cymbalta, including two weeks before starting and five days after finishing the medication.

The risk of developing serotonin syndrome increases when Cymbalta is taken in conjunction with other medications that also increase serotonin. Examples include MDMA, St John’s wort, other selective serotonin reuptake inhibitors (SSRI’s), other SNRI’, and tryptophan, among others. Take caution when combining these medications.

Aspirin can lead to an increased risk of bleeding when taken alongside Cymbalta. If you are taking aspirin in a low dose for heart attack or stroke prevention then continue to do so regularly unless your doctor instructs you otherwise.

What type of drug is Cymbalta?

Cymbalta contains the active ingredient duloxetine, which belongs to a group of drugs called serotonin-norepinephrine reuptake inhibitors (SNRI’s), which function to prolong the effects of serotonin and norepinephrine in the brain by delaying their reuptake. This is used to treat depression, anxiety, and chronic pain conditions.

How long should you take Cymbalta?

How long does Cymbalta take to work?

Improvements may be seen in one to two weeks after starting Cymbalta, however, it may take up to six to eight weeks to feel the full effects. This is dependent on taking the medication consistently and may differ between individuals.

What happens if you miss a dose of Cymbalta?

If you miss a dose of Cymbalta, take it as soon as you remember. If you remember close to the time of your next dose, skip the missed dose altogether. Take the following dose according to your medication schedule. Do not take both doses to catch up.

What happens when you stop taking Cymbalta?

Stopping Cymbalta suddenly can lead to negative side effects such as agitation, confusion, and tingling of the body. Your doctor will likely gradually decrease your dose to avoid this.

Who should not take Cymbalta?

Cymbalta should not be prescribed to pregnant people (unless required), people who are breastfeeding, children under seven years of age, or people who are allergic to the ingredients.

Can Cymbalta cause weight gain?

Weight changes with Cymbalta are typically minimal but are more likely to occur in the first nine weeks of treatment. If you are concerned with weight gain (or loss), contact your doctor.