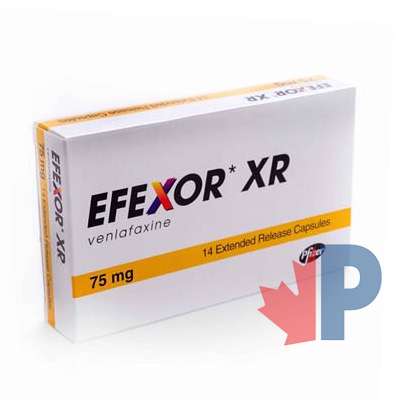 Venlafaxine, sold under the brand name Effexor, is an anti-depressant that is used to manages major depressive disorder and depression associated with bipolar disorder. This medication was the first of the Serotonin Norepinephrine Reuptake Inhibitors(SNRI). SNRIs were developed as an alternative to the adverse effects of selective serotonin reuptake inhibitors (SSRIs). Venlafaxine is also approved for management of generalized anxiety disorder and panic disorder.

Storage, Dosage & How to use Venlafaxine

Venlafaxine comes in 25mg, 37.5mg, 50mg, 75mg, and 100mg tablets. The tablets are pale peach colored, and shield shaped with a flat-face bevelled edge. The recommended starting dose is 75mg per day, taken in two to three doses with food. Take this medication at the same time each day. Store the medication away from moisture and heat.

If the tablet or capsule is difficult to swallow – do not chew or crush it. If you have the capsule, open it into a spoonful of apple sauce, then swallow immediately without chewing.

Depending on how the drug is tolerated and whether or not the desired effect is achieved, the dose may be increased to 150mg per day. The dosage must be increased over a period longer than four days. Maintenance doses may be 75mg to 225mg per day, depending on individual diagnoses.

The most common side effects are:

Other common side effects, not listed here, might occur. Sleep, appetite, and level of energy usually improve within one to two weeks. Contact your provider for any unusual symptoms or changes.

The most serious side effects that require emergency assistance are:

Serotonin syndrome is a dangerous-to-life side effect that requires urgent care. Read in the Interactions and Contraindications sections for the progression of symptoms caused by Serotonin syndrome.

Other possible serious side effects that require immediate medical help:

Some foods, herbal products, and other medications increase serotonin. Ingested while receiving Venlafaxine therapy, serotonin may increase rapidly in the body. Serotonin syndrome is a life-endangering effect of too much serotonin. Symptoms range from mild to severe, and possibly death. Before beginning Effexor treatment, inform your Prescribing Provider of all medications, supplements, and herbal products(including caffeine) that you are currently taking.

In children, teens, and young adults, Venlafaxine may initially increase suicidal thoughts and feelings when beginning this therapy. Suicidal ideation may also increase at any time of the therapy if the dosage is altered. Observe for new or sudden mood swings, behavior, the expression of worsening depression or suicidal thoughts. Contact the prescribing Provider immediately should this occur.

Danger of Weaning Too Quickly

To stop taking Venlafaxine, you and your Provider must create a weaning program, because it is NOT safe to stop the medication in one day. Stopping the medication too quickly can cause agitation, headaches, dizziness, confusion, nightmares, nausea, vomiting, diarrhea, and tingling electric sensations. Stopping this medicine too quickly can cause a relapse of depression.

Do NOT take this medication if you have uncontrolled narrow-angle glaucoma.

Use of MAO Inhibitors

Do NOT use Venlafaxine within seven days before, or for 14 days after, taking an MAO inhibitor.

Do NOT take this medication if you have had allergic reactions to Venlafaxine(Effexor) or to desvenlafaxine(Pristiq).

Before beginning Venlafaxine, tell the Provider if you are using stimulants, opioids, NSAIDs, herbal remedies, other anti-depressants or mental illness medications. Also report medications taken for Parkinson’s disease, migraine headaches, serious infections, or medications that prevent nausea and vomiting. Medications for these conditions used with Venlafaxine can cause serotonin syndrome. Serotonin syndrome is a life-endangering effect of too much serotonin. Symptoms range from mild to severe, and possibly death.

Do not breast feed when receiving Venlafaxine therapy.

Venlafaxine may increase blood pressure. High blood pressure typically has no noticeable symptoms. Monitor blood pressure vigilantly, especially when beginning use of this therapy. Discuss changes with the Provider to manage hypertension.

Be aware that this drug can cause false results on drug-screening urine lab tests.

Also, avoid activities such as driving or managing heavy equipment and machinery, until your body adjusts to the medication. Reaction time may be impaired.

Venlafaxine is not advised with certain health conditions. Discuss the benefits and risks of receiving Venlafaxine therapy with your prescribing Provider, if you have any of the following:

A number of medications given for these conditions can also interfere with the safe and effective use of Venlafaxine. Review all of your medications with the healthcare provider. The following are known to have adverse interactions with Venlafaxine:

Also, be aware that any stimulant can increase the effect of venlafaxine causing dangerous symptoms to escalate.

Using any medication or product that increases uptake of serotonin

Signs of serotonin syndrome worsening begin with increasing the heart rate and blood pressure. The patient’s pupils may become dilated. There will be a loss of muscle coordination, twitching, heavy perspiration, and confusion.

I take ibuprofen for mild arthritic joint pain. Can I take Effexor?

No. Any nonsteroidal anti-inflammatory drugs (NSAIDs) taken while using Venlafaxine can cause gastro-intestinal bleeding. Studies show the chance of stomach bleeds increase by 75% when receiving Venlafaxine therapy while taking a NSAID.

My Venlafaxine dosage is already reduced because of a kidney problem. Now my Provider says I need haemodialysis. Will I be able to continue Venlafaxine?

Yes, if your Provider agrees. Your daily dosage may have to be cut by fifty percent.

My Venlafaxine dosage is already reduced because of a kidney problem. Now my Provider says I need haemodialysis. Will I be able to continue Venlafaxine?

Yes, if your Provider agrees. Your daily dosage may have to be cut by fifty percent.

Is it all right to stop taking Venlafaxine now? I have been using it for pain, but my pain is better now.

Discuss how to gradually reduce your dosage over time with your Provider. Stopping too fast can cause uncomfortable adverse effects. The benefits gained from receiving Venlafaxine therapy may be lost if the drug is stopped too quickly.

I receive Venlafaxine therapy and have experienced good results so far. But I noticed today that my pupils seem dilated. Is this a side effect?

Dilated pupils may be a sign of Serotonin syndrome. Consider your caffeine drink intake and other stimulating foods or herbs recently ingested. Contact your clinic and discuss this symptom with the nurse or Provider. Continue to observe your symptoms. Serotonin syndrome can rapidly escalate and require emergency treatment.

I have Von Willebrand disease. Is Venlafaxine okay to take?

Venlafaxine interferes with coagulation. Call your provider and discuss whether Venlafaxine is the right choice for you, and whether the dosage should be lowered.

I have been taking Venlafaxine for diabetic neuropathy for four months. I am 65 years of age. I have become weak and with a headache most days, which is interfering with my ability to work. Could this be the Venlafaxine?

Possibly. Contact the Provider immediately and share these symptoms. Be sure to remind the provider of your age. Elderly patients sometimes need a different type of medication. You may need a lower dose or to be gradually weaned off the Venlafaxine.

I have high cholesterol and triglycerides, but I think Venlafaxine is the drug for me. How can I convince my Provider to agree to my taking Venlafaxine?

Discuss management of your condition to control the cholesterol and triglyceride levels. Also discuss other medications that might be a better fit for you.

I am experiencing post-partum blues. I have a history of depression and I want to get back to taking Venlafaxine, but I am breastfeeding my baby. Is this medication safe to use when breastfeeding?

No. Venlafaxine moves through the mother’s milk, so the baby will receive high doses of the drug by breastfeeding. Discuss the benefits and risks of using antidepressants during breastfeeding with your provider. Also ask about other therapeutic options, including other antidepressant drugs, which might be safer to use.

Yes. St. John’s Wort increases serotonin levels and could lead to serotonin syndrome, a dangerous condition that requires immediate attention. St. John’s Wort should be weaned from your system prior to beginning Venlafaxine. Contact your prescribing Provider to discuss how to manage the switch from one to the other.

I started Effexor four weeks ago, but I still do not feel better. Does the medicine work on everyone?

If you are taking Venlafaxine as instructed, the medication can take three to six weeks to become effective. Review the Medication insert that comes with Venlafaxine to confirm you are following instructions for how to take the medicine and be patient for another two weeks.

I have been taking Venlafaxine for three months. I feel better now. How long do I need to take this medicine?

The duration for taking Venlafaxine varies depending on the reason for taking it. Generally, people take Venlafaxine at least six months. However, those who have severe depression or drug-resistant depression may be on an open-ended care plan for using this form of therapy. Some clinicians advise to remain on this medication for six months to a year after your condition returns to balance.

Will I become addicted to Venlafaxine?

Venlafaxine is not addictive.

I have migraines but so far medicines are not super effective. Would Venlafaxine work?

Venlafaxine is also used, off label, for migraine therapy. When there is also moodiness or other symptoms of depression, Venlafaxine reduces both the frequency of headaches and improves the mood.

Ever since I survived a heart attack, I have been depressed. Can Effexor help improve my mood?

Of the most commonly used antidepressants, Venlafaxine is one of the lowest risk for severe side effects when used with heart medications. Talk to your Provider about the risks and benefits of treating depression in heart disease.

I just realised I missed my dose of Venlafaxine yesterday. Should I take double today?

No. Double dosing can lead to too much serotonin and potential serotonin syndrome. If you missed the full day of three doses, inform your Provider. Record any unusual or new symptoms should any occur. If only one or two of the three doses was missed, there is likely not a relapse of  symptoms. However, keep records of the dose missed and any associated new symptoms.

I have been taking Venlafaxine for six months and I am much better. My friends are throwing a birthday party for me this weekend. Can I drink alcohol?

No. Alcohol and any other nonprescribed drugs used while on Venlafaxine therapy will increase side effects, especially sedation. The benefits achieved from Venlafaxine will likely be reduced as well.