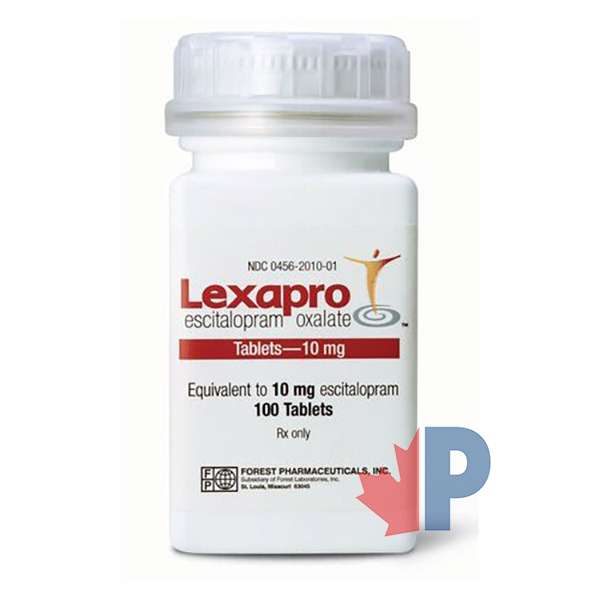 What is Lexapro (Escitalopram)?

Lexapro (escitalopram) is one in a group of drugs called selective serotonin reuptake inhibitors (SSRIs). It is taken by adults and adolescents at least 12 years of age to treat major depressive disorders. In adults, it is also used to treat anxiety.

How does Lexapro work?

Lexapro has an effect on the brain, altering certain chemical levels in people who may be suffering from depression or generalized anxiety disorder. On a chemical level, Lexapro is similar to Celexa (escitalopram) and both are SSRIs, along with Prozac (fluoxetine), Paxil (paroxetine) and (Zoloft) sertraline.

Lexapro stops serotonin from returning to its original nerve, resulting in higher levels of serotonin available in the brain to bind to receptors.

The amount you are prescribed will depend upon a variety of factors, including your age and medical condition. Generally, adults will begin with a daily dose of 10 mg. If necessary, this may be increased after a minimum of one week.

Initially, 10 mg orally daily, increasing, if necessary, after a minimum of one week to 20 mg to be taken once each day.

Initially, 10 mg to be taken orally once each day, to be increased after a minimum of one week, if necessary, to 20 mg once each day

The recommended dose is 10 mg to be taken orally once each day.

How should you take Lexapro (Escitalopram)?

Lexapro should be used precisely as instructed on the label, or as your doctor has prescribed. Do not increase or decrease the amounts or use Lexapro for longer than has been recommended to you. Be sure to read all the information and instructions and follow the advice on the prescription label.

Try to take Lexapro at the same time each day. It can be taken with or without food.

Use a dosing syringe or a medicine dosing device to measure out a liquid dose, but do not use a normal kitchen spoon.

Make your doctor aware of any changes in your sexual activities after commencing your Lexapro treatment. Changes such as loss of sex drive and finding it difficult to achieve orgasm should be reported to your doctor. For men, trouble achieving an erection and ejaculation issues should also be reported to their doctor. Some sexual issues can be addressed with treatment.

Your treatment should be regularly re-evaluated so progress can be assessed. Children taking Lexapro should have their height and weight gain evaluated.

You mustn’t suddenly cease taking Lexapro. If you do, you might experience unpleasant withdrawal symptoms. Instead, take your doctor’s advice and gradually taper your dose.

How to store Lexapro

Be sure to store Lexapro away from moisture and heat, at room temperature.

Lexapro side effects appear to be the same for men and women, but they are slightly different between adults and children.

Amongst adults, the side effects may include:

Amongst children and adolescents, the side effects may include the above, but also the following:

There have been reports of Lexapro use in children and adolescents resulting in a loss of appetite and a decrease in weight. Your child’s doctor should monitor their height and weight throughout treatment.

Depression tends to leave patients with a decreased appetite and weight loss. However, there have been some cases of Lexapro causing adults to put on a little bit of weight. It is important to bear in mind that gaining weight might simply be a case of balance being restored. With better-managed depression comes a better appetite. Some patients find they lose weight whilst on Lexapro. In this case, it could be that the increase in serotonin is resulting in a loss of appetite.

Most of the above side effects are negligible and should dissipate without any need for additional treatment. If they turn severe or do not dissipate, the patient should inform their doctor.

Lexapro has been known to increase thoughts of suicide and suicidal actions, particularly amongst children, teenagers, and young adults. This is more probable during changes in dosage or within the first 2 or 3 months of being treated with Lexapro. The patient should immediately contact their doctor after they notice any of the following symptoms.

If these symptoms are new, getting worse or becoming upsetting, the patient should contact local emergency services.

Do not take Lexapro if you are allergic to it or any of its ingredients. Allergy symptoms can include:

There have been cases of patients on Lexapro having seizures, so individuals with a history of seizures are more vulnerable.

Serotonin syndrome occurs when there is too much serotonin in the body. It is a serious condition that is more likely to happen if the patient is also taking other medications that may increase serotonin. These include antidepressants or lithium. The symptoms can include:

Lexapro can result in low salt levels, but this is more likely in senior patients, those who take water pills, or patients who are dehydrated. The side effect can cause the following:

Your pupils may become dilated due to using Lexapro, leading to a glaucoma attack, even if the patient does not have a background of eye trouble. The symptoms may include the following:

Do not use Lexapro if you are already taking pimozide or citalopram (Celexa).

Do not use Lexapro 14 days before or 14 days after using an MAO inhibitor. This includes but is not limited to:

Younger patients sometimes have suicidal thoughts when first taking antidepressants, so it is important to monitor mood changes and changes in symptoms. Make the doctor aware of any new or worsening symptoms. Children under the age of 12 should not take Lexapro.

A patient should inform their doctor of all over-the-counter and prescription medications, supplements and herbs they are taking.

How long will it be before I see results?

Can I stop taking Lexapro whenever I want?

Patients should not stop taking Lexapro without first consulting their doctor. To avoid unpleasant side effects, treatment should be tapered, not suddenly stopped.

What side effects might I experience from suddenly stopping Lexapro?

If you do not gradually reduce your dose, you may experience the following:

How is Lexapro available?

I’m pregnant, should I take Lexapro?

Lexapro has not been established as safe for pregnancy and breastfeeding, so it should not be used whilst the patient is pregnant unless their doctor believes the anticipated benefits to the mother outweigh the hazards to the fetus.

Since Lexapro is excreted through breast milk, it should not be taken by nursing mothers unless their doctor believes the anticipated benefits to the mother outweigh the hazards to the fetus.

Do I need to take Lexapro with food?

Patients can take Lexapro orally, either with or without food. It is usually taken once each day, either in the morning or evening.

What should I do if I miss a dose?

What should I do if I overdose?

Seek emergency medical attention as soon as possible. If someone has collapsed or isn’t breathing after taking an overdose of Lexapro, call emergency services immediately.

Should I avoid any activities whilst on Lexapro?

When you begin your Lexapro treatment, your reactions could be compromised. You should avoid driving or any other potentially hazardous activity until you identify how the medicine affects you.

Can I drink alcohol whilst taking Lexapro?

What is the danger of drinking alcohol whilst taking Lexapro?

Not everyone taking Lexapro will experience side effects if they drink alcohol too. However, they are strong substances and drinking alcohol while using Lexapro can cause:

Mixing the drug with alcohol may also increase the risk of Lexapro’s side effects becoming more severe. These include:

Lexapro can also increase suicidal thoughts and behaviors. Since alcohol can exacerbate depression worse, it can mean a patient is more at risk of suicide. Most patients should not drink alcohol whilst taking Lexapro. But if the drug is good at managing your condition, your doctor may agree that it’s safe to have an occasional drink. However, depending on your situation, your doctor may recommend you stop drinking whilst on Lexapro.

What else is Lexapro sometimes used for?

Sometimes Lexapro is also used “off-label” for conditions it is not approved for. These conditions include:

Should I be concerned about weight gain/loss with Lexapro?

What other medications can interact with Lexapro?

Lexapro may interact with the following:

Should my doctor be aware of my other health conditions?