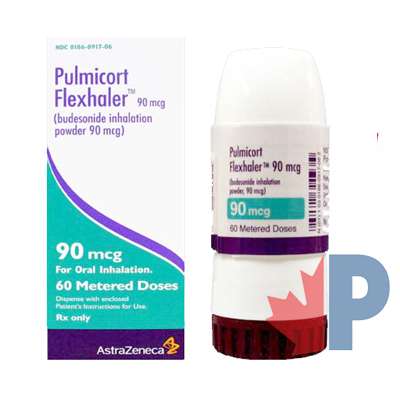 What is the Pulmicort Flexhaler?

Pulmicort Flexhaler (budesonide) is a prescription corticosteroid that is inhaled into the lungs for the treatment of asthma.

How does the Pulmicort Flexhaler work?

Pulmicort Flexhaler is a dry powder corticosteroid that is breathed into the lungs using an inhaler. It settles into the lung tissue, suppressing the chronic inflammation caused by asthma.

Pulmicort Flexhaler is indicated for the treatment of patients with persistent asthma. It works to prevent and control shortness of breath and wheezing caused by asthma. It must be used regularly (for at least two weeks) before any effect is seen. Its slow onset of action means that it should not be used to treat acute asthma.

Local effects on the mouth and throat

Pulmicort Flexhaler is a corticosteroid that causes mild suppression of the immune system. This may worsen existing bacterial, fungal, or viral infections. Patients with tuberculosis, herpes simplex, measles or chickenpox can be seriously affected.

Suppression of the adrenal system

Pulmicort Flexhaler results in lower levels of steroids in the rest of the body than when taking oral steroids. However, this lower dose may still be enough to suppress the body’s own production of corticosteroids from the adrenal glands. This may lead to adrenal insufficiency during periods of severe stress where additional corticosteroid is needed or when Pulmicort Flexhaler is suddenly stopped.

Patients taking Pulmicort Flexhaler are at risk of having a reduction in their bone density due to the long-term effect of the inhaled steroid. This may increase the risk of developing bone fractures.

Inhibition of growth in children

The long-term use of inhaled steroids can cause an increase in eye pressure (glaucoma). It also increases the long-term risk of developing cataracts.

Pulmicort Flexhaler has not been tested extensively in persons under six years of age. As a result, its use is not recommended in this age group.

The safety of Pulmicort Flexhaler has not been tested in breastfeeding mothers. Its active ingredient (budesonide) is found in breastmilk. The risk to the infant should be weighed up against the benefit for the mother. This should be discussed with a doctor.

Common side effects of Pulmicort Flexhaler include:

Certain drugs may interact with Pulmicort Flexhaler. These include:

In what form is Pulmicort Flexhaler manufactured?

Pulmicort Flexhaler is manufactured as a dry powder that contains budesonide. It comes in two strengths: 90 mcg and 180 mcg. Each inhaler can deliver 60 or 120 doses.

What is the dose of Pulmicort Flexhaler?

How should I take Pulmicort Flexhaler?

The Pulmicort Flexhaler must first be primed before you use it. Hold the unit at the bottom on the brown grip and point the white cover upward. Use your other hand to lift off the white cap. Twist the brown grip firmly in one direction, as far as it will go, and then turn it back to the original position. It does not matter which way you choose to turn it first. As you do this, you will hear a click. Repeat the twisting action. Once you hear a second click, you have competed priming the unit. You never need to prime the unit again, even if it is not used for a long time.

When using Pulmicort Flexhaler, hold the unit with the brown grip at the bottom and the white mouthpiece at the top. Twist the brown grip firmly in one direction, as far as it will go, and then turn it back to the original position. It does not matter which way you choose to turn it first. As you do this, you will hear a click. The unit is now loaded with one dose.

Take a breath in, and then blow it out. Put the mouthpiece into your mouth and wrap your lips around it. Take a deep hard breath in through the inhaler. You might not feel that any medication is being inhaled, but this does not mean you have not received a dose. Do not repeat an inhalation. Take the mouthpiece out of your mouth and breath normally. If you need a second dose, repeat the steps as described above.

It is important to rinse your mouth out once you have inhaled your dose. This is to prevent you from developing thrush in your mouth and throat. Make sure that you do not swallow the water.

What should I do if I miss a dose of Pulmicort Flexhaler?

If you miss a dose of Pulmicort Flexhaler, try to take it as soon as possible, then continue with the usual medication schedule. However, if you are due to take your next dose in less than 3 hours, skip the dose you missed and continue with your regular medication schedule. Under no circumstances should you take a double dose of the medication to make up for the missed dose. If you are unsure about what to do, contact your doctor or local pharmacist to obtain advice.

What side effects can I experience when taking Pulmicort Flexhaler?

Pulmicort Flexhaler is an inhaled corticosteroid. The most common side effect is related to the steroid’s immunosupperion effect, which can cause thrush in the mouth and throat. This is generally easily treated by your doctor. Other side effects include:

Some side effects can be severe and require medical attention. Contact your doctor immediately if you notice any of the following:

What should I do if I experience severe side effects when taking Pulmicort Flexhaler?

If you experience severe side effects, immediately contact your doctor or go to the nearest emergency health care facility.

How should Pulmicort Flexhaler be stored?