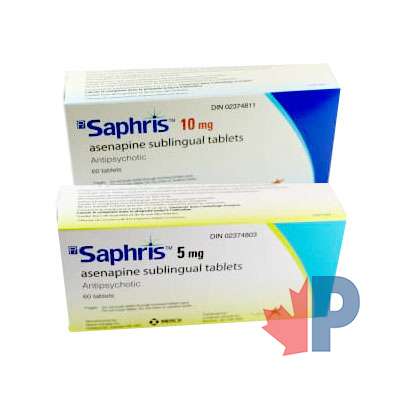 What is Saphris (asenapine)?

Saphris (asenapine) is a second-generation atypical antipsychotic drug used in the treatment of schizophrenia and bipolar 1 disorder. Saphris works by rebalancing dopamine and serotonin in the brain which can improve mood, behavior, and cognitive function.

What is Saphris Used For?

Saphris is used in the treatment of schizophrenia for adults; and bipolar 1 disorder for adults and children who are at least 10 years old.

Saphris is not recommended:

How is Saphris Used?

Saphris is a sublingual tablet that comes in a blister pack. It should not be removed from the blister pack until it is ready to be administered. The tablet should be placed under the tongue and allowed to dissolve completely so the medication can be fully absorbed. The tablet should take no longer than a few seconds to dissolve. You should not eat or drink for 10 minutes after the tablet has dissolved.

The recommended starting dose of Saphris for patients with schizophrenia is 5mg twice daily. If tolerated after one week, the dose can be increased to 10mg twice daily.

The recommended starting dose of Saphris for adult patients with bipolar 1 disorder is 5mg-10mg twice daily.

The maximum daily dose of Saphris is 20mg/day. It is important to note that the safety of 20mg/day has not been evaluated in clinical studies.

The recommended starting dose of Saphris in children aged 10-17 with bipolar 1 disorder is 2.5mg twice a day. The dose can be increased after 3 days to 5mg daily, and from 5-10mg twice daily after another 3 days.

If you miss a dose of Saphris, take it as soon as you remember. If it’s almost time for your next dose, skip the missed dose and go back to your regular schedule. Do not take two doses at the same time.

If you overdose on Saphris, serious side effects can develop. Symptoms of an overdose include agitation, confusion, and restless muscle movements. Call 911 or seek emergency medical care if you suspect an overdose.

If you experience signs of an allergic reaction such as hives, fast heart rate, wheezing, difficulty breathing, or swelling of your face, mouth, or throat, call 911 or seek emergency medical care.

The most common side effects of Saphris include:

Long-term use or high doses of Saphris can cause serious movement disorders that may not be reversible. Call your doctor if you notice:

Saphris is contraindicated in those who have a known allergy or sensitivity to asenapine or any of its ingredients.

Saphris is not indicated in children younger than the age of 10.

Use of Saphris during pregnancy is not recommended unless the benefits outweigh the risks. Neonates exposed to antipsychotics during the third trimester have exhibited agitation, muscle rigidity, tremors respiratory distress, and feeding difficulties.

It is not recommended to breastfeed while taking antipsychotic medications such as Saphris.

Saphris is not indicated in elderly patients with dementia-related psychosis. These patients exhibited a higher incidence of cerebrovascular events such as CVA and TIA.

Some patients who have taken Saphris have developed Neuroleptic Malignant Syndrome (NMS). NMS is associated with hyperreflexia, muscle rigidity, altered mental status, autonomic instability (irregular or fast heart rate and blood pressure, sweating, and cardiac arrhythmias), elevated creatine phosphokinase, rhabdomyolysis, and acute renal failure. If you exhibit any of these symptoms, the use of Saphris should be discontinued.

Some patients who have taken Saphris have developed potentially irreversible, involuntary, dyskinetic movements. The likelihood of developing tardive dyskinesia in patients who take Saphris is unknown, patients should be monitored for signs and symptoms such as facing grimacing, fish-like mouth movements, and involuntary tongue movements.

Atypical antipsychotic drugs have been associated with an increase in hyperglycemia, dyslipidemia, and weight gain. Patients taking Saphris should be monitored for these conditions.

Hypersensitivity reactions have been observed in patients after taking the first dose of Saphris. Symptoms of a reaction include anaphylaxis, angioedema, hypotension, tachycardia, swollen tongue, dyspnea, wheezing, and rash.

Saphris can cause orthostatic hypotension and syncope in some patients. Patients should be instructed about non-pharmacologic interventions to reduce the occurrence such as sitting on the edge of the bed for several minutes before attempting to stand.

Blood dyscrasias have been reported in some patients taking Saphris. Patients with preexisting low white blood cell counts, low neutrophil counts, or a history of drug-induced leukopenia/neutropenia should be monitored routinely while taking Saphris. Saphris should be discontinued if severe neutropenia occurs.

Saphris has been associated with QT prolongation. Saphris should be avoided in combination with other drugs known to cause prolonged QT intervals. Patients with a history of cardiac arrhythmias should also avoid Saphris due to the increased risk of torsade de pointes and sudden death.

Saphris can cause elevated prolactin levels. Hyperprolactinemia can suppress hypothalamic GnRH which can result in impaired reproductive function in both males and females.

Caution should be used in patients with a history of seizures. Saphris can lower the seizure threshold. Seizures may be more prevalent in patients aged 65 and older taking Saphris.

Potential for Cognitive or Motor Impairment

Cognitive or motor impairment may occur due to central nervous system depression. Patients taking Saphris should use caution when operating heavy machinery until certain that they do not experience adverse effects.

Saphris has been associated with body temperature dysregulation. Caution should be used in patients who have a history of temperature disorders.

This is not a complete list of potential drug interactions. Before taking Saphris, tell your doctor if you take any medications, herbal supplements, or vitamins.

Medications that Cause Sedation

Many medications can increase the risk of side effects associated with Saphris. Medications such as opioids, alcohol, marijuana, sleep or anxiety medications, muscle relaxants, and antihistamines should be discussed with your doctor before taking with Saphris due to the increased risk of drowsiness.

Medications that Cause QT Interval Prolongation

Medications with the potential to increase the QT interval should be avoided or closely monitored while taking Saphris.

There are other drugs available to treat Schizophrenia. Speak to your doctor to discuss other medications.

Typical Antipsychotics are an older class of drugs used in the treatment of schizophrenia. They work by blocking dopamine receptors in the brain and improving motor control, focus, mood, and emotions.

Along with antipsychotic drugs, your doctor may prescribe another type of medication to help manage your symptoms. Some other drug classes that you may be prescribed include mood stabilizers and antidepressants.

Who should not take Saphris?

People who are allergic to Saphris or any of its ingredients or anyone with severe liver problems.

What are the common side effects of Saphris?

Will I gain weight when I take Saphris?

How do I take Saphris?

Remove the tablet from the blister pack. Do not split, chew or crush the tablet. Place the tablet under your tongue and allow it to dissolve completely. Do not eat or drink for 10 minutes after the tablet dissolves.

How quickly does the Saphris tablet dissolve?

Saphris should dissolve within seconds of being placed under your tongue.

Can I put Saphris in my weekly pillbox?

Leave Saphris in the blister pack until it is time to take it.

What are the available doses of Saphris?

Can I take Saphris for Bipolar 2 disorder?

Saphris is only indicated for patients with schizophrenia or bipolar 1 disorder.

What should I do if I miss a dose of Saphris?

If you miss a dose of Saphris, take it as soon as you remember. If it’s almost time for your next dose, skip the missed dose and go back to your regular schedule. Do not take two doses at the same time.

Can Saphris be taken during pregnancy?

Taking Saphris during pregnancy is not recommended.

Can I breastfeed while taking Saphris?

Breastfeeding while taking Saphris is not recommended.

Is Saphris safe for people over the age of 65?

Yes. However, caution should be used in patients over the age of 65.

Is Saphris indicated in children?

Saphris is safe for children who are 10 years of age and older.

What should I do if I develop involuntary movements while taking Saphris?

What should I do if I take too much Saphris?

Contact your doctor immediately if you take too much Saphris. Serious symptoms can develop.

Is black cherry the only flavor available?

Yes, black cherry is the only available flavor.