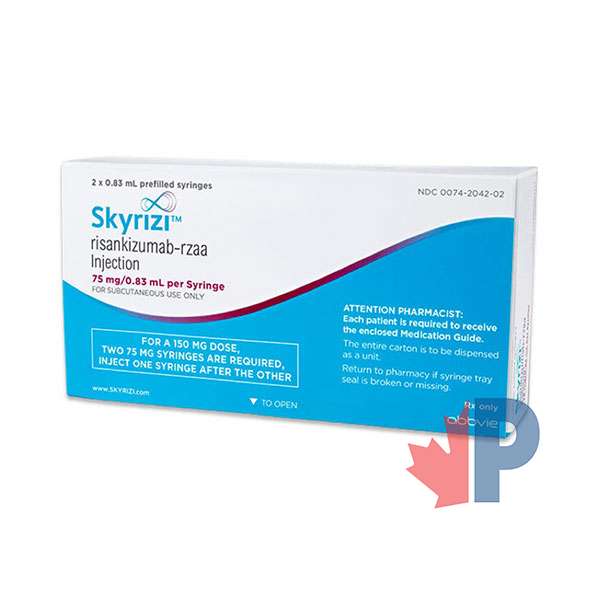 SKYRIZI is a drug used to treat adult patients with moderate-to-severe plaque psoriasis. Patients must be candidates for treatment with systemic therapy or with phototherapy.

HOW DOES SKYRIZI WORK?

SKYRIZI is a biological agent (humanized immunoglobulin monoclonal antibody) that blocks the action of interleukin-23. Interleukin-23 plays a vital role in the immunological dysfunction that causes the development of plaque psoriasis.

­­WHAT ARE THE INDICATIONS FOR SKYRIZI?

SKYRIZI is indicated for use in adult patients who have plaque psoriasis. The psoriasis must be moderate to severe, and the patient should be a candidate for systemic treatment or phototherapy.

WHAT IS THE DOSE OF SKYRIZI?

The dose of SKYRIZI for the treatment of plaque psoriasis is 150 mg injected subcutaneously at week 0, week 4, and then every 12 weeks after that.

Testing for tuberculosis before starting SKYRIZI

SKYRIZI has its effect by inhibiting the action of interleukin-23. Unfortunately, a side-effect of this is that patients become more prone to bacterial infections. As a result, patients must be tested for latent tuberculosis infections before starting treatment with SKYRIZI. In addition, once starting SKYRIZI, patients should be monitored for active TB infections.

Before starting SKYRIZI, healthcare providers should ensure that patients have been fully immunized according to current immunization guidelines. Where possible, avoid using live vaccines in patients who are taking SKYRIZI.

SKYRIZI is not affected by patients with moderate hepatic impairment. Therefore, no dose adjustments are necessary.

There are no significant increases in the blood levels of SKYRIZI in patients with severe renal dysfunction. No dose adjustments are therefore required in this population.

SKYRIZI has not been tested in children under the age of 18 years. As a result, its use is not recommended in this age group.

SKYRIZI has not been extensively studied in pregnant women, and its use in this population should be avoided.

The safety of SKYRIZI has not been tested in breastfeeding mothers. Therefore, the risk to the infant should be weighed up against the benefit for the mother. This should be discussed with a doctor.

Use in the elderly

Data suggest that no dosage adjustments are required when prescribing SKYRIZI for elderly patients.

There are no contraindications to the use of SKYRIZI.

The most common side effects seen with SKYRIZI are:

Where possible, avoid using live vaccines in patients being treated with SKYRIZI.

What is the most important information I should know about SKYRIZI?

People who take SKYRIZI have an increased risk of developing infections. If you have signs of a new infection (raised temperature, fatigue, weakness, malaise), do not delay in contacting your healthcare provider. If you have a history of a TB infection or exposure to someone who has had TB, you must inform your doctor about this.

In what form is SKYRIZI manufactured?

SKYRIZI is manufactured as a colorless to slightly yellow liquid prepackaged for injection. The fluid is clear and has no sediment or flakes. Each syringe of SKYRIZI contains 75 mg of risankizumab-rzza.

What is the dose of SKYRIZI?

The dose of SKYRIZI is 150 mg (two syringes) subcutaneously. This is injected on week 0, week 4, and then every 12 weeks after that.

How should is SKYRIZI taken?

SKYRIZI is injected under the skin. Two syringes of 75 mg are needed to provide the total 150 mg dose. The syringes are prefilled and should not be reused.

Give each of the injections to a different site. Do not inject into areas that are bruised, tender, indurated, or affected by psoriasis. Only inject SKYRIZI into the upper arm if a healthcare provider does the injection. You can inject SKYRIZI yourself, but you must have received training on safely performing the injection.

Wash and dry your hands before handling the medication. Take an alcohol swab and clean the area you have chosen for injection. Allow the alcohol to dry. Hold the prefilled syringe with the tip facing down. Check the liquid in the syringe to ensure that it is not cloudy and does not contain flakes or large particles.

Remove the needle cover and hold the syringe between your thumb and index finger. Insert the needle at a 45-degree angle into the skin with a short-quick motion. Slowly depress the needle plunger until the entire syringe is empty. Once empty, remove the needle using the same angle that you inserted it at. Place a cotton ball over the injection site and keep it under pressure for at least 10 seconds.

Repeat this process for the second injection, but make sure you use a different site for the injection.

Who should not take SKYRIZI?

There are no official contraindications to the use of SKYRIZI. However, if you currently have an active infection, or if you have a history of recurrent or severe infections, you should inform your doctor about this before starting SKYRIZI.

What should I do if I miss a dose of SKYRIZI?

SKYRIZI should be taken as prescribed. If you forget to take your dose as specified, contact your doctor to discuss the timing of the next injection.

What side effects can I experience when taking SKYRIZI?

The most common side effects seen with SKYRIZI are:

What should I do if I experience severe side effects when taking SKYRIZI?

If you experience severe side effects, immediately contact your doctor, or go to the nearest emergency health care facility.

How should SKYRIZI be stored?

How should SKYRIZI be stored?