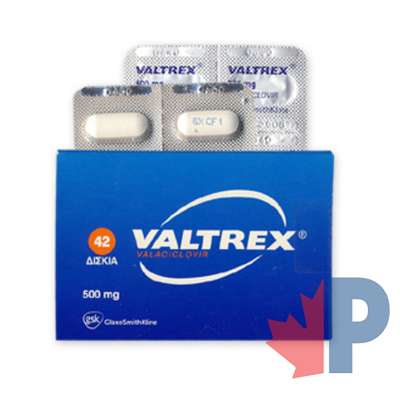 Valtrex is a prescription medication used to treat a variety of viral conditions. In adults, it is indicated for:

Cold Sores: Valtrex can be used to treat cold sores, also known as herpes labialis. It is not known if Valtrex is effective after clinical cold sore symptoms (e.g., a vesicle, papule, or ulcer) have occurred.

Herpes Zoster: In immunocompetent adults, Valtrex can be used to treat herpes zoster (shingles) within 72 hours of rash onset.

Valtrex is also indicated in pediatric patients for:

Cold Sores: Valtrex can be used to treat cold sores in individuals 12 years of age or older. It is not known if Valtrex is effective after clinical cold sore symptoms (e.g., a vesicle, papule, or ulcer) have occurred.

Chickenpox: Immunocompetent pediatric patients aged two to 18 years of age can use Valtrex to treat chickenpox. Valtrex should be started within 24 hours after rash onset.

The safety and efficacy of Valtrex is not known in:

How does Valtrex work?

Valtrex is an antiviral medication that functions as a deoxynucleoside analogue DNA polymerase inhibitor. It works against the ?-herpes viruses.

Common side effects of Valtrex include:

There have been reports of acute renal failure in:

If anuria or acute renal failure occurs, providers should consider hemodialysis until the patient’s renal function has recovered.

Patients with reduced renal function or with underlying renal disease taking higher than recommended Valtrex doses may experience CNS effects. For example, there have been reports of hallucinations, confusion, agitation, delirium, encephalopathy, or seizures in patients with underlying renal disease taking too high doses of Valtrex. Additionally, elderly individuals are at higher risk of developing CNS adverse effects. If a patient experiences CNS effects, Valtrex should be stopped.

Use in specific populations

Data indicates that valacyclovir and its metabolite, acyclovir, do not cause birth defects. However, there is not enough data on its potential association with miscarriage or fetal or maternal outcomes. There are, however, risks associated with untreated herpes simplex virus during pregnancy, specifically to the fetus.

Valtrex can be used in children at least 12 years of age or older for the treatment of cold sores. This is based on data from two double-blind, placebo-controlled trials that evaluated Valtrex in adolescents with a history of cold sores. Valtrex can also be used to treat chickenpox in patients aged 2 to 19 years of age. This is based on a valacyclovir study and three supportive trials evaluating acyclovir in pediatrics.

The safety and efficacy of Valtrex is not known in:

In a study evaluating valacyclovir to treat herpes zoster, older participants experienced a longer duration of pain after healing than younger participants. Geriatric patients are more likely to have decreased renal function and need their valacyclovir dose reduced. Therefore, geriatric patients are at higher risk of having renal or CNS adverse events.

Individuals with renal impairment should take Valtrex at a lower dose than normal.

How do I take Valtrex?

Take Valtrex exactly as your doctor tells you to. Your dose will depend on what condition you are treating. If you are taking Valtrex for the purpose of cold sores, shingles, chickenpox, or genital herpes, take it as soon as you start having symptoms. Symptoms may include tingling, burning, itching, or appearance of a sore.

Make sure to stay well hydrated while taking Valtrex. Drink sufficient amounts of water throughout your course of therapy. If you are taking a Valtrex suspension, shake the bottle well prior to using.

Do I need to take Valtrex with food?

Valtrex can be taken with or without regard to food.

What happens if I take too much Valtrex?

If you overdose on Valtrex, contact your physician right away or immediately go to the closest emergency room.

What do I do if I miss a dose of Valtrex?

If you miss a dose of Valtrex, take it once you remember. However, if it is close to the time when you would take your next dose, do not take the missed dose. Instead, take the next dose at your normal time. Never take more than one dose at a time or take it differently than prescribed by your doctor.

What is important to tell my doctor before taking Valtrex?

What are the side effects of Valtrex?

Common side effects of Valtrex include:

More serious side effects of Valtrex include:

How do I store Valtrex?

Keep Valtrex tablets at a temperature between 59° to 77°F (15° to 25°C). For a Valtrex suspension, keep it in the refrigerator between 36° to 46°F (2° to 8°C). Throw out any leftover Valtrex suspension after 28 days. Store Valtrex in a tightly closed container.