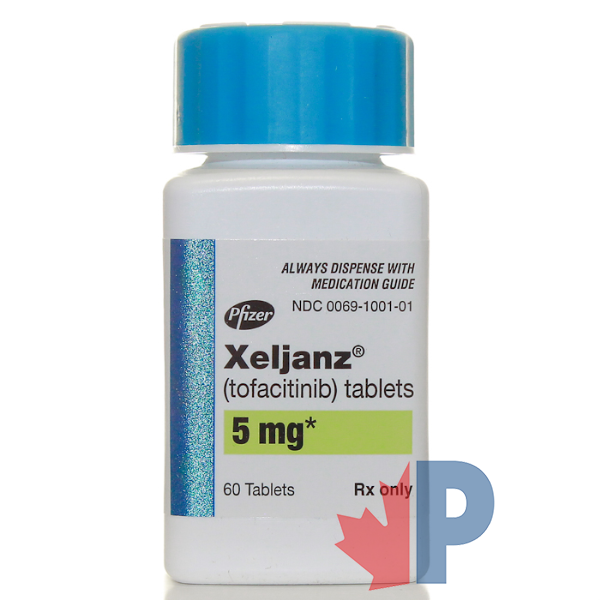 What is Xeljanz (Tofacitinib)?

How does Xeljanz (Tofacitinib) work?

Xeljanz tablets should be swallowed whole. Do not crush, chew or break extended-release tablets.

The recommended starting dose of immediate-release tablets is 10mg twice daily and extended-release tablets 22mg daily for eight weeks. If remission is not achieved, this dose can be continued for a maximum of 16 weeks.

The recommended starting dose of Xeljanz for treating polyarticular course juvenile idiopathic arthritis is based on the child’s body weight. Children under 18 should only be prescribed immediate-release tablets or oral solution.

If you miss a dose of Xeljanz, take it as soon as you remember. If it’s almost time for your next dose, skip the missed dose and return to your regular schedule. Do not take two doses at the same time.

Taking too much Xeljanz can lead to serious side effects. If you suspect an overdose, seek emergency medical attention or call the poison control helpline at 1-800-222-1222.

If you experience signs and symptoms of an allergic reaction, such as hives, rash, itching, difficulty breathing, or swelling of the face, mouth, or throat, seek medical attention immediately.

The most common side effects of Xeljanz include:

Some serious side effects can also occur; seek immediate medical attention if you experience any of the following symptoms:

Xeljanz is approved for children two and older to manage polyarticular course juvenile idiopathic arthritis who have tried a TNF blocker and have not achieved symptom management.

Xeljanz is not recommended for use during pregnancy or while breastfeeding. The safety and efficacy have not been studied in these patients.

Patients taking Xeljanz require close monitoring for signs of infection. If a severe infection or sepsis develops while taking Xeljanz, it should be discontinued immediately. Patients who develop a new infection while receiving Xeljanz should be closely monitored and treated.

Cases of new or reactivated tuberculosis infections have been observed in patients taking Xeljanz. Patients who previously had tested negative for tuberculosis before initiating Xeljanz have developed the disease. Testing for latent TB may be negative while receiving treatment with Xeljanz. Tuberculosis should be strongly considered in patients who develop a new infection while receiving treatment with Xeljanz, especially those that have previously or recently traveled to areas where TB is more prevalent.

Cases of herpes virus and hepatitis B reactivation have been reported with the use of Xeljanz. Patients should be screened for viral hepatitis before starting treatment with Xeljanz.

Nonmelanoma skin cancers have been reported in patients taking Xeljanz. Periodic skin examinations are recommended while receiving treatment with Xeljanz.

Blood clots, including pulmonary embolism (PE), deep venous thrombosis (DVT), and arterial thrombosis, have occurred in patients taking Xeljanz. Patients should be instructed to monitor for signs and symptoms of blood clots before initiating treatment. Patients who present with blood clot symptoms should be evaluated promptly, and Xeljanz should be discontinued.

Gastrointestinal perforations have been reported in patients with rheumatoid arthritis who received treatment with nonsteroidal anti-inflammatory drugs like Xeljanz. Caution should be used in patients with a history of diverticulitis. Patients who present with new onset of abdominal pain should promptly be evaluated for gastrointestinal perforation.

Live vaccinations should not be given concurrently with Xeljanz. It is recommended that pediatric patients receive all live vaccines before starting Xeljanz.

This is not a complete list of potential drug interactions. Before taking Xeljanz (Tofacitinib), tell your doctor if you take any medications, herbal supplements, or vitamins.

Ketoconazole, when used with Xeljanz, can increase exposure to the medication. Xeljanz dosage should be decreased if taken with a strong CP3AF Inhibitor.

Fluconazole used in fungal infections, when given with Xeljanz, can increase the exposure to the medication. Xeljanz dosage should be decreased when used together with these medications.

Rifampin can decrease exposure to Xeljanz and reduce clinical response when given in conjunction with Xeljanz.

Immunosuppressive drugs such as azathioprine, tacrolimus, and cyclosporine increase the risk of infections when taken with Xeljanz, and coadministration is not recommended.

There are other drugs available to treat rheumatoid arthritis and ulcerative colitis. It is important to note that this is not a complete list of alternative treatments; speak to your doctor to discuss other medications.

Hydroxychloroquine belongs to a class of medications called antimalarials. It works to treat rheumatoid arthritis by decreasing the activity of the immune system.

Sulfasalazine belongs to a class of medications called anti-inflammatory drugs. It works to treat rheumatoid arthritis and polyarticular juvenile idiopathic arthritis by reducing inflammation within the body.

Leflunomide belongs to a class of medications called disease-modifying antirheumatic drugs (DMARDs). It treats rheumatoid arthritis by decreasing inflammations and slowing disease progression. Other medicines used to treat rheumatoid arthritis in this class include azathioprine (Imuran).

Corticosteroids can be used to treat moderate to severely active ulcerative colitis. They work by suppressing the immune system, which decreases systemic inflammation. Due to this medication’s short and long-term side effects, it should only be used in active flare-ups and not as maintenance. Other medicines used to treat ulcerative colitis in this class include budesonide (Uceris), hydrocortisone (Cortef), methylprednisolone (Medrol), and prednisone (Rayos).

These drugs control and suppress the body’s immune system so that it cannot cause inflammation. These medications can take several months to become effective and are often used with aminosalicylates or corticosteroids. Other medicines used to treat ulcerative colitis in this class include azathioprine (Azasan), 6-mercaptopurine (6-MP), cyclosporine (Sandimmune), and tacrolimus (Protopic).

Biologics are reserved for treating people with moderate to severe ulcerative colitis. They work by providing antibodies that stop the body from causing inflammation. Other medications in this class used to treat ulcerative colitis include adalimumab (Humira), infliximab (Inflectra, Remicade, Renflexis), golimumab (Simponi), and vedolizumab (Entyvio).

These drugs work to reduce inflammation by targeting the immune system. They are used in patients with moderate to severely active disease. Other medications in this class used to treat ulcerative colitis include ozanimod (Zeposia), tofacitinib (Xeljanz), and upadacitinib (Rinvoq).

Can you take Xeljanz when pregnant?

Xeljanz is not recommended for use during pregnancy.

Can you Xeljanz when breastfeeding?

Xeljanz is not recommended for women who are breastfeeding.

Xeljanz is approved for treating polyarticular course juvenile idiopathic arthritis in children two years of age and older who did not respond to TNF blockers.

How do I take Xeljanz?

Xeljanz should be swallowed whole, with or without food. Extended-release tablets should not be crushed, chewed, or split.

What are the potential side effects of Xeljanz?

What should I do if I miss a dose of Xeljanz?

If you miss a dose of Xeljanz, take it as soon as you remember. If it’s almost time for your next dose, skip the missed dose and return to your regular schedule. Do not take two doses at the same time.

What if I have taken too much Xeljanz?

If you suspect an overdose, seek emergency medical attention or call the poison control helpline at 1-800-222-1222.

Can I receive a vaccine while taking Xeljanz?

It is not recommended to receive live vaccines while receiving treatment with Xeljanz.

What should I do if I think I have an infection while taking Xeljanz?

If you suspect an infection while taking Xeljanz, call your doctor immediately.

Do I have to have my blood checked while receiving treatment with Xeljanz?

Intermittent blood work is needed to check for blood abnormalities while receiving treatment with Xeljanz.

Does Xeljanz cause cancer?

Cancer has been reported in some patients receiving treatment with Xeljanz. If you have concerns about developing cancer while taking Xeljanz, speak to your doctor.

What is Xeljanz used for?

What should I do if I develop severe abdominal pain while taking Xeljanz?

Does Xeljanz cause weight gain?

Xeljanz does not cause weight gain.

Does Xeljanz cause hair loss?

Xeljanz is not known to cause hair loss.