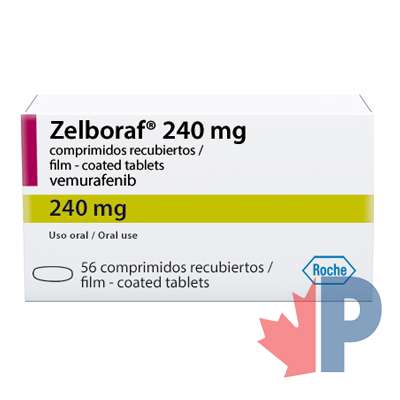 Zelboraf is a BRAF kinase inhibitor, antineoplastic medication that is used in the treatment of malignant melanoma and Erdheim-Chester disease cases that involve BRAF mutations. It may be used alongside other medications or by itself. Zelboraf is not used in cases of melanoma that involve a normal BRAF gene.

How is Zelboraf Used?

If a patient has vomited after taking a dose, they should not take an additional dose of the medication and should simply proceed with taking their next scheduled dose.

Patients should take Zelboraf exactly as prescribed by their physician to ensure maximum safety and efficacy and minimize the potential for side effects.

Keep this medication out of the reach of children at all times.

Zelboraf should be stored in its original container, and patients should ensure that the lid remains tightly closed when not in use.

Zelboraf is prescribed for the treatment of:

How Does Zelboraf Work?

Zelboraf is an antineoplastic medication that is, more specifically, a BRAF inhibitor. In patients that have melanoma or ECD with certain BRAF mutations, Zelboraf functions by inhibiting the activity of the mutated BRAF gene. By stopping the action of this abnormal gene, Zelboraf is able to stop the cell division leading to the conditions spreading, and it may also shrink melanoma tumors.

Zelboraf is available in tablet form with only one strength of 240 mg.

The most common dosage is four of the 240 mg tablets (960 mg) taken twice daily.

Patients using Zelboraf should be sure to take the medication exactly as instructed by their prescribing physician.

Patients should avoid taking more than instructed by their doctor. If an overdose has occurred or is suspected, patients should contact their local Poison Control Center or doctor for further advice.

Zelboraf is associated with a variety of common as well as serious side effects.

The most common side effects include:

Some of the following serious side effects may occur when taking Zelboraf and should be reported to your prescribing physician as soon as possible:

Zelboraf is associated with a number of different risks. Patients should be sure to discuss their medical history and any other medication use before beginning treatment with this medication.

Severe allergic reactions are possible in those who are taking Zelboraf. If you are taking Zelboraf and experience symptoms such as difficulty breathing, a swollen throat or face, flu-like symptoms, skin blistering or a rash, swollen glands, or jaundice, seek emergency attention immediately.

Zelboraf is capable of impacting the electrical activity that occurs within a patient’s heart, and this may lead to abnormalities in heart rhythm. The risk of this condition, referred to as QT prolongation, is further increased in individuals also using tacrolimus, arsenic trioxide, pentamidine, mefloquine, moxifloxacin, pimozide, chlorpromazine, thioridazine, quinidine, or sotalol for treatment. The following factors place patients at a notably higher risk of QT prolongation when using Zelboraf: being over the age of 65 years, being female, having a slow heart rate, having a family history of abnormal heart rhythms or heart disease, diabetes, nutritional deficiencies, history of stroke, congenital prolongation of the QT interval, low levels of calcium, low levels of magnesium, and low levels of potassium.

Development of Other Cancers

Zelboraf comes with the risk of patients potentially developing additional cancers, as well as having the medication speed up the progression of certain pancreatic and blood cancers. Patients using Zelboraf will typically be monitored for such conditions occurring, and those with a history of cancers besides the ones for which they are using Zelboraf should inform their physician to ensure they are receiving the safest possible dosage of the medication for their current treatment.

Zelboraf may cause inflammation within a patient’s eye and cause blood vessel blockages to develop. Any changes in vision or other eye-related symptoms should be reported to the patient’s prescribing physician immediately.

Zelboraf is associated with increased blood pressure, and this factor will be monitored by your doctor throughout treatment. Patients with preexisting high blood pressure should discuss their history of hypertension with their physician before beginning treatment with Zelboraf.

Zelboraf use may result in impaired kidney function, and it may also cause kidney failure in some individuals. Patients with a history of kidney-related health conditions should be sure to discuss this with their physician before beginning treatment with Zelboraf, as this may impact the dosage and efficacy of Zelboraf.

Zelboraf may impair liver function in some individuals and may even cause liver failure, which can be fatal. Patients that experience any of the following symptoms of reduced liver function should contact their prescribing physician as soon as possible: appetite loss, nausea, jaundice, feeling unwell, fatigue, itchy skin, pale stools, abdominal swelling, or abdominal pain.

Zelboraf is associated with a high risk of skin changes, including some that may be serious, such as cutaneous squamous cell carcinoma and new melanoma. Any changes in the patient’s skin while using it should be reported to their prescribing physician immediately.

This medication also causes sun sensitivity, resulting in an increased risk of developing sunburns which may be severe. Protective measures, such as protective clothing and sunscreen, should be used when taking Zelboraf and going outdoors.

Zelboraf is capable of harming an unborn child if used by a patient that is pregnant. This medication should not be used by pregnant individuals unless the benefits of Zelboraf have been determined to be greater than the potential risks. Patients it should avoid pregnancy during treatment and continue to take measures to avoid becoming pregnant for at least six months after stopping the medication. Patients that become pregnant during treatment should report this to their physician immediately.

The safety for breastfeeding patients has not been determined. It is advised that patients who are breastfeeding or desiring to breastfeed while using Zelboraf speak with their physician about the potential risks involved.

Speak to your doctor about any medications or herbal supplements you are currently taking before beginning treatment. Discuss any concerns you may have with your doctor or a trusted pharmacist.

The following medications and substances are known to interact with Zelboraf:

For patients who are unable to take Zelboraf or experiencing significant adverse side effects, alternative medications may be used to treat some of the associated conditions for which this medication is commonly prescribed:

What is Zelboraf approved to treat?

What skin changes should I report to my doctor?

Zelboraf may cause the development of new skin cancers in some patients. Individuals using this medication should report any new melanoma lesions that may appear, any new warts, any moles that have changes occur in their color or size, or any new red bumps or skin sores that either do not appear to heal or that bleed.

What should I avoid when using Zelboraf for treatment?

Patients using Zelboraf should be careful to avoid exposure to sunlight as this medication can result in significant skin sensitivity, especially to radiation. This increased sensitivity can result in severe sunburns, and patients should exercise caution regarding taking appropriate safety measures when outdoors. This includes using sunscreen and lip balm with sunscreen included, as well as wearing protective clothing and keeping the skin covered.

What are some of the serious side effects of taking Zelboraf?

Zelboraf is capable of causing severe side effects in some individuals. Patients experiencing any of the following should contact their doctor and seek medical attention immediately: severe skin reactions, severe allergic reactions, changes in liver function, changes in kidney function, eye problems, connective tissue disorders, changes or irregularities pertaining to heartbeat (QT prolongation), or worsening of any side effects associated with radiation treatment.

What are the most common side effects of taking Zelboraf?

What are the most important things I should know about Zelboraf?

How should Zelboraf be taken?

Patients should take Zelboraf exactly as instructed by their prescribing physician. This medication is typically taken twice per day, with 12 hours between each dose. It may be taken with food or without, but the manner in which the patient takes the medication should remain consistent for each dose. The tablets should never be chewed or crushed. If vomiting occurs after taking one of their daily doses, an additional dose of the medication should not be taken to compensate for this. They will simply need to just take their next scheduled dose. If a dose has accidentally been missed, it may be taken once the individual remembers. However, a missed dose should not be consumed if the next upcoming dose is to occur within the next four hours.

How should Zelboraf be stored?

Zelboraf should be stored at room temperature, ranging between 68°F (20°C) and 77°F (25°C). Temporary exposure to temperatures no lower than 59°F (15°C) and no higher than 86°F (30°C) are permitted. This medication should be stored in its original container and packaging, and patients that have this medication in their possession should ensure that the lid stays tightly closed when it is not currently being administered.

What are the ingredients in Zelboraf?

Who should not take Zelboraf?

Should certain foods be avoided while taking Zelboraf?

Patients using Zelboraf should be sure to avoid drinking grapefruit juice or consuming grapefruit while using the medication, as this may result in higher levels of Zelboraf remaining in the patient’s blood compared to the proper excretion taking place and keeping these levels balanced during treatment.

Are their risk associated with children, geriatrics or nursing/pregnant women?

Zelboraf comes with significant risks for geriatric patients, and those above the age of 60 years may require special monitoring or other changes in how their condition is managed with the medication. Use in pediatric patients has not been shown to be effective nor safe in those with metastatic or unresectable melanoma with the BRAF V600 mutation. Patients that are nursing are advised against breastfeeding due to the potential risks to their child. It should not be used by pregnant women.

What is Zelboraf intended to treat?

Zelboraf is intended to treat Erdheim-Chester disease in individuals with a BRAF V600 mutation as well as malignant melanoma in those who have a BRAF V600E mutation.

How does Zelboraf work?

Zelboraf functions by either slowing down cell division or fully stopping the growth and spread of cancerous cells within the patient’s body. It is capable of recognizing the harmful cancer cells that are present, attaching to them, and then inhibiting their continued spread.

What forms of Zelboraf are available?

Zelboraf is available in tablet form with a single strength option of 240 mg.

How should Zelboraf be used?

Zelboraf is typically taken twice daily, with 12 hours between each dose. Most patients using this medication will consume four tablets (960 mg) for each twice-daily dose. Tablets should not be chewed or crushed, and they should be swallowed whole along with a full glass of water. Additionally, it may be taken with or without food. However, this medication should be taken in the same way at the exact same time of day consistently.